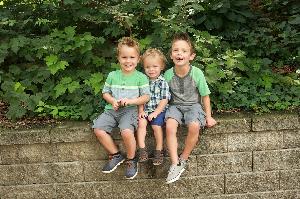 I have 3 boys, each of which have Childhood Apraxia of Speech. Life has been crazy since October 2017, when we discovered their diagnosis of suspected verbal Apraxia. Evans SLP first suspected it when he was almost 3. A week later, I spoke with Landon's preschool teacher, she mentioned that his SLP was also suspecting apraxia. He was 5.

I went into a tailspin... researching and second guessing while feeling overwhelmed and guilty. I was scared (some days I still am) and confused. We knew both children were behind in speech but the early childhood program hadn't been too concerned. Heck, Landon was denied services twice because he wasn't "too far behind." (I should have advocated harder. The school system suggested to read to him and talk to him more while in the car , if only that were the case. Denying Landon of the services that he needed was a huge disservice).

At this point, we relied a lot on our SLPs and apraxia-kids. We found private speech clinics to help but still felt alone. We knew intensive speech therapy with an apraxia-trained SLP was the way to go... but how to you find that? How do you afford it? I learned pretty quickly that not many knew of apraxia, even medical professionals.

Verbal apraxia, a neurological motor based speech disorder. Meaning, it never goes away. It requires intense speech therapy, 3-5 sessions/week. Every case varies and can look different over the persons lifespan. Only 1 kid in every 1000 has it. The goal with intense therapy is to have a persons speech become clear enough that they're understood by everyone. It is possible, but they'll always have hiccups. Adults who have apraxia report regression when they're sick, tired. It is also difficult for them to pronounce a new word for the first time.

The following few years blur together... we saw a neurologist, genetic specialist, ENT (all 3 had tonsils removed), orofacial myofuntional speech therapist, a dentist that specializes in tongue and lip ties (Landon had a tongue tie clipped), psychologist, developmental pediatrician, OTs and multiple SLPs. Over all, they were healthy! There wasn't an underlying condition that caused the apraxia. In our situation, it is genetic. At some point, science will advance enough to find the chromosomal abnormality that they have.

Cade qualified for speech therapy through the early childhood program at the age of 2, thank goodness! It took a while to decifer if he had apraxia or was mimicking his brothers. He also started private speech therapy. I can't tell you when his diagnosis of apraxia became clear but he was set up with good supports.

The road is still bumpy. Some days are great while others are hard. They hate going to speech therapy and working on daily homework but they do!  As they grow, we continue to learn more. Each new discovery and diagnosis helps us understand them more. It then opens doors and enables us to get them the help that they need. Majority of people with apraxia have other co-morbid diagnosis, these diagnosis make speech therapy more difficult. I hope, down to my core, that there will be a day that they'll be understood by everyone.

These boys are incredible. They're resilient. They're strong. They will do anything to cheer someone up who's feeling down. I love them, my apraxia stars !