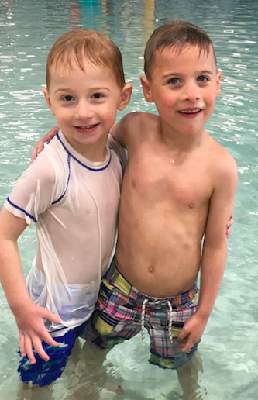 Jax & Austin, best friends, one disorder, stand up and speak out and fight this battle together. Jax and Austin became the best of buddies in their preschool class, both fighting the same disorder, Childhood Apraxia of Speech (CAS). Both parents didn’t realize at the time that their child had a buddy in their class that was fighting the same fight. One winter day, while swimming at the YMCA, Jax ran up to a little boy and instantly started playing with him. Puzzled, I asked Jax if he knew him, and he responded, “Yes!” It was at that moment that both families discovered that they were fighting the same fight. Numerous playdates have been scheduled since then and the families have been friends ever since. The two families can relate and lean on each other to get through the tough days. They also get to watch the boys play and laugh together.

Jax and Austin have a bond that is unexplainable. The two are inseparable. They both enjoy swimming and love doing it together. They understand one another and their true personalities come out when they are playing together.

Jax’s story- At 18 months of age, Jax started speech therapy and physical therapy through Help Me Grow due to not meeting several milestones. After a year and a half in speech therapy sessions, Jaxon was diagnosed with CAS. He has gone through intensive speech therapy (3 times a week) and speech camp during the summer. He is also in occupational therapy, vision therapy and most recently just graduated from physical therapy. He has overcome many obstacles in his short life and continues to prove that he is a fighter. His speech continues to improve daily. Additionally he uses the LAMP app and basic ASL to help him communicate when he's having a difficult time finding his voice. He loves to swim, the outdoors, spending time with his family and friends and is a huge fan of the Columbus Blue Jackets and Cincinnati Reds!

Austin’s story- Around 9 months of age Austin started with Help Me Grow due to not meeting several milestones as well. Austin started out with physical therapy. At about 18 months of age, Austin started speech therapy. Austin had 2 years of speech therapy every week and wasn’t making hardly any progress. We later soon found out he was tongue tied and he was diagnosed with apraxia of speech. Austin got the tongue tie procedure done and it helped with his eating and his vocabulary. Once Austin started working with Amy and then Rhonda at preschool and speech camp is when he really started to make progress. Austin is now repeating more and more words and his confidence is building. They have worked as a team with Austin and he is saying new words nearly every day. Ashley is another speech therapist Austin sees every week. Everyone is working so hard as a team to help Austin and we are seeing such an improvement. He’s trying to put a couple words together and it’s amazing! Austin has a great big smile who loves his family and friends so much, especially his baby sister. Austin loves playing outside, chasing the chickens and sheep, swimming, reading books, Thomas the train, tractors and going places.

Please join our team and walk with us to support these two loving boys who have so much to offer in life! They have taught us how to love and have showed us how to be a true fighter in life.