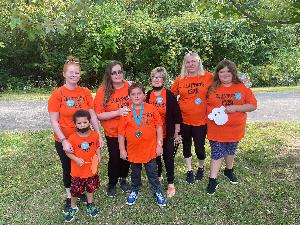 We walk for Clayton. When Clayton was nine months old he was diagnosed with hypertonia. Early intervention came in to do physical therapy with him which led to speech therapy evaluation. This was the first time we heard the word Apraxia. And we were told he would grow out of it. This information is wrong. When Clayton was 4 he was officially diagnosed with Verbal/Oral Apraxia. So, at this time he was receiving therapy for speech, sensory, low tone and was having seizures. The only treatment for Apraxia which is a lifelong diagnosis is speech therapy. Clayton has received therapy at least twice a week if not more since he was 18months old. When Clay was seven he was diagnosed with Velophanlagical Insufficiency. This a where the palate in the back of his mouth wasn't working properly. After he had surgery, he was reevaluated for Apraxia. He now has not only a neurological diagnosis that effects his speech but also a structural one.

Today Clayton is 10 almost 11 years old and still fights valiantly for his voice to be heard. We don't walk just for Clayton, we walk for research and resources so parents aren't as lost as we were.Why I walk for Apraxia Kids!I walk to support all children diagnosed with apraxia of speech - our Apraxia Stars. To show these children they are not alone and to acknowledge all the hard work they must do to overcome communication challenges that affect their day-to-day lives.

I walk to raise funds for the mission of Apraxia Kids – to strengthen the support systems in the lives of children with apraxia of speech by educating professionals and families; facilitating community engagement and outreach; and investing in the future through advocacy and research.

Please help me meet my fundraising goal by making a donation now or by joining our team.  You, too, can make an impact for children and families affected by apraxia!

I believe, “Every child deserves a voice”.