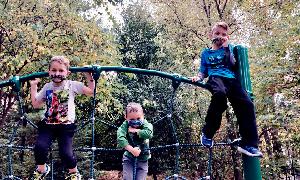 Hello friends, family, and supporters! Welcome back and thank you for showing interest in The Mighty Meyer Boys. All 3 boys continue to work hard towards their goals every day. Apraxia is rarely seen without other diagnosis', it was just a start for our journey! Here are some updates --

Landon has grown up a lot, he’s officially a big kid and is very funny! It is natural for him to que into others feelings and needs. His teachers adore him, he’s a fantastic student (thank goodness)! Landon completed summer school and is now enjoying a bit of a break. He loves swimming, spending time with friends and playing basketball. Basketball has become his new outlet, which I’m thrilled about!

We learned this year that Landon has Developmental Coordination Disorder (DCD) aka global apraxia aka dyspraxia, which is very common with apraxia (a child typically has more than one motor skill disorder). We now know why physical things are more difficult for him and know better ways to help him learn new tasks. It has always taken a LARGE amount of practice and repetition for him to learn a new skill. Physical and Occupational Therapists will continue to monitor his progress.

Landon has continued Speech Therapy, Occupational Therapy and some counseling this year. It is hard. ADHD is hard. Anxiety is hard. Understanding his words is hard. SPD is hard. Reading is hard. Not being included is hard. Landon tries to be patient but gets frustrated... I don't blame him the slightest! He's learning coping mechanisms, which has really helped but he still hurts. He's at an age where he sees the differences between himself and his peers but doesn't understand why.

Ev is still very happy yet strong-minded and carefree! He loves being with peers and included in what they’re doing. Evan has become best friends with our neighbor, who was in his Kindergarten class. Kindergarten went great! He made more friends, participated in class and was happy. Our neighbor has really been an amazing support and a blessing for Evan.

Evan also has DCD, which is more prevalent than in Landon. At this point, he doesn't let it bother him too much. He just wants to have fun with his friends. No matter what peers are around, Evan just jumps right in to any activity. When someone doesn't understand what he's saying, he changes the subject or will come up with a creative way to show them.

We've also learned that Evan has low muscle tone, just enough to affect his core strength. His body compensates for it very well. He has always worn out easily, walks or long bike rides would be difficult. We have to make sure he's doing the right exercises to build core muscles. Evan is also flat footed and has started wearing orthotic inserts in his shoes, this has been a game changer. His gait is much better, which will also help strengthen his muscles.

Evan continues private Speech Therapy and Occupational Therapy. He has made progress when it comes to sensory needs and has gotten better at realizing when he needs break. Fine motor skills are a work in progress! His speech continues to be very difficult to understand.

Oh Cade, where do I even start with this ball of fire?!? He finished his second year of preschool and will be in kindergarten this fall. He loves playing t-ball, riding his bike, playing with friends and cuddling with Mommy. He is excited to participate in other sports, we will see where this road takes us!

We discovered that Cade has Convergence Insufficiency, which is where his eyes don't work together when things are up close. He will likely need vision therapy in the future, but in the meantime, his Occupational Therapist is familiar with exercises that'll help. He goes to OT twice a week, ST three times a week and has graduated from PT! He also struggles with low muscle tone but did a good job building up his core muscles.

The next few years will reveal a lot. I hope that he doesn't struggle to read or write. His speech is coming along so well. It's incredible to have a meaningful conversation with him, I will always be thankful that they caught is diagnosis at a younger age.

Paul and I continue to advocate for all of their needs. We are continuously learning how to help the boys and how to be more patient. We just want them to be included, happy and successful. As parents, we feel like we are doing as much as we can do help, but I don't think this guilt will ever go away. We hate not being able to make it easier for them.

Never did I realize how heartbreaking it can be to raise kids with invisible disabilities. Socially, emotionally, and physically they are effected day after day after day. They fight and will continue to fight. But damnit, I wish they didn't have to.

THIS is why we walk. We show them how much we support them and everything that they go through. They are not alone. We celebrate them, our Apraxia Stars by coming together and having fun. We educate others so they won't be so critical. Please join us, your support means more than you will ever imagine.

Mommy of The Mighty Meyer Boys