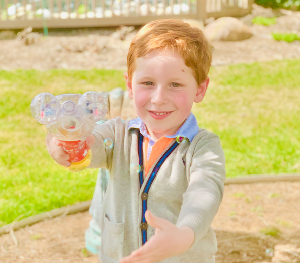 Welcome to Team Bubbaroo! This is our third walk with Apraxia Kids and we appreciate all of the support along the way from the community, friends and family!

Robert was diagnosed with suspected apraxia in 2018. He started attending The Kaufman Center for speech and OT. We also reached out to a neurologist chiropractor and used some alternative methods of therapy to stimulate the side of the brain where speech is located. Before starting either of these Robert had minimal words. During this time, we had so many questions as a family on how to best help Robert and if we were doing everything possible to provide him the support he needed. We were dedicated to taking every possible chance to helping him whether it be with traditional or alternative methods. We knew the lack of communication via speech caused a lot of frustrations for Robert during this time and it was difficult to watch as a parent him struggle to communicate the way he wanted to and trying to interact with his peers.

He started with Early Childhood Special Education the following year with our school district and started attending pre-school designed for children with speech delays where he received help while still continuing to go to The Kaufman Center. He started producing more and more words and then the pandemic hit and he stopped going to school and speech for the remainder of the year (2020). Even through the pandemic and lack of support via speech therapy and school he continued to improve tremendously with his speech.

As we move into 2021 his teachers are astonished at the amount of speech he has developed during the pandemic. He has surpassed all of his goals for speech with the community schools which was set at forming 2-3 word phrases and now his main goal is to work on articulation and clarity of his speech to make it easier for his peers, teachers and family to understand. We have attended fLipSpot gymnastics where his "Coach" helped him with OT therapy during the pandemic when they were able to open safely before being allowed to return to school.We are so grateful for the support we have recieved from our school district, The Kaufman Center (specifically Nancy and her methods, we are true believers in her system!), his speech therapists and all of the others that have helped him professionally along the way. The Detroit community truly has some great support for children with apraxia!

He has become a chatter box and is contantly talking about dinosaurs, hot wheels and so much more!

Thank you for all of the support everyone has provided us over the difficult years of apraxia and specifically for your part in helping Robert improve!