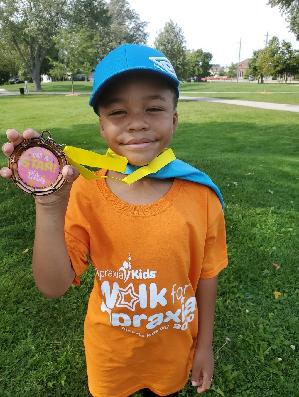 Marlowes Journey started when he was 3 years old. We noticed his words weren't clear and he didn't say much like other kids his own age could. I looked at it as maybe he was just a late bloomer. So we got some advice from our pediatrician to possibly try him with speech therapy while he's still young before he starts school. So as time went on we decided to get him early speech therapy when he was just three and a half. We got him speech therapy through a program called "Talk to me program". He was only on a waiting list for about a month before getting into speech therapy. At this time he has speech therapy two and sometimes three days a week. His speech pathologist were both great. He was able to get speech therapy and prompt therapy and had help a lot but when it was time for Marlowe to eventually start Junior kindergarten we begin to worry if it was the right choice to send him to school being around children who may possibly make fun of his speech and not understand him fully. Marlowe's speech pathologist had told us with his assessments and her examining him he possibly might have apraxia of speech. We never heard of this before so it was a challenge. After days of Googling, reading, checking out the Apraxia kids website and reading pamphlets and books we realize a lot of symptoms and sounds Marlowe had was of a child who had Apraxia of speech. So we spoke it over with our pediatrician and with the notes and things he read he diagnosed Marlowe with apraxia of speech about 2 months later with more evaluation.  When Marlowe started school he was released from the "Talk to me" program after being in it for over a year and it was hard as speech pathologist became our friends and they helped him so much. When Marlowe started junior kindergarten he started speech therapy through  "John Mcgivney's Children's Center". He had a new speech pathologist to work with him two times a week and still worked with him to this day. She's excellent. Marlowe has been finding his voice and sounds and is doing such a good job. We are so proud of him and his accomplishments that he's made. He also gets all the help he needs at home as we do homework with him including reading, speech sounds, flashcards Etc. We have been doing the walk for Apraxia 3 years now. It has been amazing. Especially being around other children and families who are going through the same things and challenges as we are. This organization is truly a blessing. Our Apraxia star Marlowe is doing well and in school getting good grades and uses his AAC device when not understood.  He is presently involved in soccer and baseball. He's made some great friends and has an amazing support team with his family, speech pathologist and teachers who has all made this journey a bit easier for him. He works so hard. We will continue to be Marlowe's Army to help him everyday find his voice and sounds.