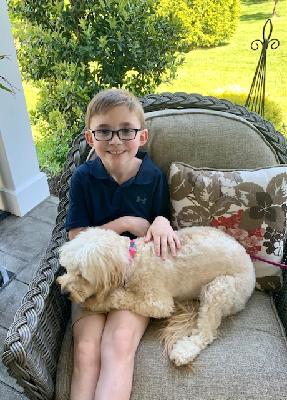 We walk for Apraxia for our 8 year-old son, Graham and to show my support for children in our community with apraxia, our shining stars. Graham was born with Childhood Apraxia of Speech (CAS). CAS is a neurological motor planning disorder. In a nutshell Graham's brain isn’t able to send the right messages to his mouth, lips, cheeks, jaw, or tongue; so he has great difficulties in executing intelligible speech. At 18 months he was not babbling or saying any words. We went for our first speech evaluation and were told he was only four months behind and they were unable to help us at that time. His doctor laughed it off saying, "he's a boy. He'll start talking when he's ready." Not willing to just sit back while he was falling further behind, we referred him to Alabama's Early Intervention program. Through Early Intervention, he received speech therapy once a week, as well as occupational therapy twice a month, and music therapy weekly. Progress was extremely slow even though he was working really hard. We also started him in private speech once a week. Graham was still not making much progress.

We knew we had to do more to help him! Apraxia had been mentioned as a possible diagnosis and after lots of research we found the Apraxia Kids website. This website was such a blessing for our family. We were able to set up an evaluation with David Hammer to finally get some answers and hopefully a diagnosis. In May of 2015, we took Graham to Pittsburgh, PA for a two day evaluation. He was diagnosed with moderate to severe CAS. We had a wonderful experience in Pittsburgh and finally had a plan for how to help Graham. David Hammer was amazing to work with!

We were then faced with the task of finding a therapist who was trained in Apraxia to help Graham. We thought we would have to travel to Nashville to find the right therapist for him. Luckily, David had a therapist here in Huntsville that had been through the Apraxia Bootcamp. Two weeks later, we had a new speech therapist, a new pediatrician, and lots of hope for the future! Over the past 8 years, Graham has gone to speech as many as five times a week. Slowly he began to make progress and last summer, he graduated from speech therapy!

Every dollar raised helps support the Apraxia Kids. I believe in the work Apraxia Kids does to strengthen the support systems in the lives of children with apraxia so that each child is afforded their best opportunity to develop to their full potential.

We need your help!  This year you can join our team for free! Would you please consider  joining our team for the walk?  Graham would love your support!  If you choose to donate, your donation goes to fund amazing programs like iPads for children who need it to communicate, parent and speech therapist workshops, research, and a program to assist families in need with speech therapy costs.

We walk to support all children diagnosed with apraxia of speech - our Apraxia Stars. To show these children they are not alone and to acknowledge all the hard work they must do to overcome communication challenges that affect their day-to-day lives.

Every child deserves a voice!